Disney+ has lockdown bonanza in Europe

As Disney announces a record 54 million subscribers for its streaming service Disney+ mobile traffic soars, according to network data from Enea

STOCKHOLM, Sweden May 7, 2020 – From just over a month since its European debut, mobile video traffic from new streaming service Disney+ has reached 7 Exabytes per month according to data from Enea. On Tuesday May 5th Disney confirmed that it has secured 54 million subscribers within days – providing relief to parents with children off from school – and creating headaches for mobile operators who have to juggle the exponential demand for data during nationwide lockdowns.

The analysis of the traffic from Enea is based on live data gathered from over 40 networks globally. In North America and Europe, Disney+ currently represents 1.2% to 2.2% of all mobile video traffic. Netflix – which was launched in Europe in 2012 and a few years earlier in the US – accounts for 7% to 15%.  As a new entrant to the mobile video ecosystem, Disney+ has achieved an impressive presence in just a matter of a few weeks. In terms of specific network protocols such as HTTP, Disney+ now features within the top-10 mobile video applications according to data volume across the territories in which the service has launched. As such, the future potential of Disney’s streaming service is a matter of great interest to all mobile operators.

The intensifying streaming wars and the meteoric rise of Disney+ mirrors the findings of a separate global study that was conducted by research firm Censuswide for Enea. The researchers interviewed 5,000 mobile subscribers across the USA, UK, Japan and the UAE. They found that 1 in 3 people (29%) were planning on subscribing to Disney’s streaming service. 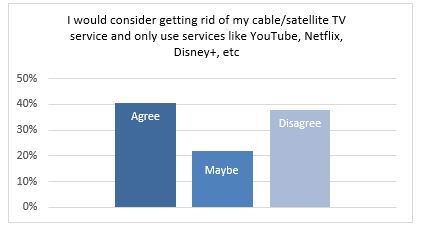 For wireless operators, there is even more mobile video traffic to come as consumers continue to cut the cord and shun traditional broadcast technology in favor of Over-The-Top media services (OTTs). The survey revealed that 41% of respondents would consider getting rid of their multichannel cable or satellite TV service and only use the likes of YouTube, Netflix and Disney+.

As a customer acquisition strategy, OTTs have already explored mobile-only pricing in emerging markets, and Netflix has launched mobile-specific plans in India, Malaysia, Thailand and the Philippines. These could prove hugely popular as the survey revealed that 39% of subscribers who currently watch mobile video would opt for a mobile-only subscription to services such as Netflix, Disney + and Apple TV +. 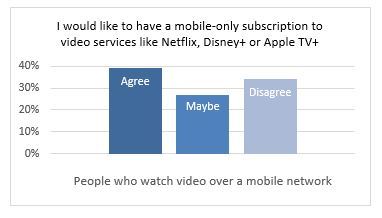 John Giere, President, Enea Openwave said: “Some operators in Europe’s hardest hit regions have already experienced twice the usual amount of peak throughput during the lockdowns. While most of the OTT traffic from the likes of Netflix and Disney+ is currently running over Wi-Fi, this additional video traffic will very likely shift to wireless as lockdowns are eased.”

Giere concluded: “There was already more OTT video traffic on mobile networks than ever before, even before Disney+ came along. Operators have to perform a delicate balancing act with available resources and not allow congestion to ruin the video experience for many. That requires the ability to detect and manage network congestion dynamically, rather than resorting to brute-force video optimization. The operators that have applied this methodology have seen significant reductions in RAN congestion and improved the video experience for subscribers.”

For APAC and EMEA Inquiries: